Art and Culture in Mandi 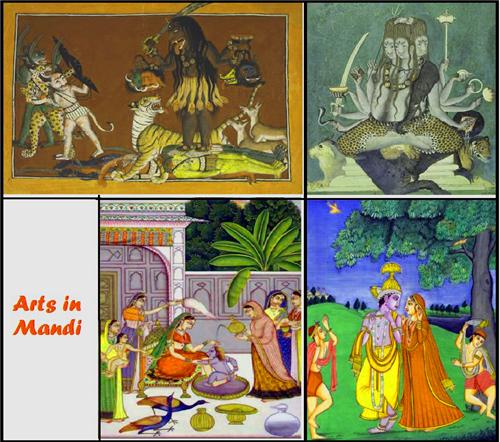 The Art in Mandi which are such as the Rugs and Carpets, the Shawls, Stone and the Metal Work, the  Wooden Crafts, and also the traditional jeweleries and so on. There are even handicrafts such as the Gudmas, the leather chappals, as well as the Namdas (the Rug made out of the Beaten Wool), etc.
Tourists can visit the ‘Himachal Darshan Photo Gallery’ which is established just 4 Kms away from Mandi. This Art Gallery consists of a lovely Photograph collection of not just the Mandi, but the whole State of Himachal Pradesh, which resembles the social and cultural heritage of the entire state.

The Culture of Mandi includes the communication, food, as well as the lifestyle of the people of Mandi like the clothing, and wearing of the ornaments, also the celebrations like the fairs and festivals, marriage celebration all around the Mandi district. The local language spoken by the people residing in the Mandi is the ‘Mandyalis’.

While, the food consumed by these people is the Sepu Wadi, which is said to be the main food of Mandi region. Also, they consume the lunch which is called as the ‘Dham’ and is commonly arranged in the functions or any occasions like the marriages, kitty parties, birthday celebrations and many more.

Like other parts of the country, Clothing is given a great importance in the city of Mandi. This city or town wears clothing which is clubbed with both the traditional and western style. Few years before, the Boys in Mandi were supposed to wear the Kurtas and Pyjamas; while, the girls used to wear saris and suits. But, due to the arrival of the western culture, the people of Mandi have started to wear the Western Outfits. However, still there are huge numbers of people who wear the traditional outfits of the Himachal Pradesh.

Fairs and Festivals in Mandi

Mandi is very popular for the celebration of different types of fairs and festivals. One among which is the ‘Maha Shivratri Fair’, which is conducted during the month of March every year. While, this fair goes on till 7 days; and this Shivratri celebration has been started during the year 1526 as the remembrance of the foundation till now.

As per the historical records, the capital of Mandi was situated on the bank (right side) of the River Beas. And currently, it is called as the ‘Purani Mandi’ which means an ‘Old Mandi’. This place of Mandi is considered as the holy place due to the visit of the 10th Sikh Guru, who blessed that ‘Mandi will remain Safe always’.

Comments / Discussion Board - Art and Culture in Mandi