The Madho Rai temple of Mandi is devoted to the deity Madhao Rai (Lord Krishna), who was the commanding deity of the early Mandi State. This idol of  'Madho Rai' includes the flute in the hand of deity Madhav Rai, similar to Lord Krishna. While, the image of the deity has been made by the Goldsmith known as 'Bhima'.

Madho Rai was a successful ruler of Mandi, and he occupied the throne of Mandi, because of the disability of Suraj Sen (Earlier king of Mandi). Suraj Sen lost his sons (eighteen sons) and did not had any successors to rule after him. So, due to the separation of his son, he became very disappointed and became disable to rule, and handed his ruling power to the powerful ruler 'Madho Rai' who ruled Mandi successfully on behalf of Suraj Sen. 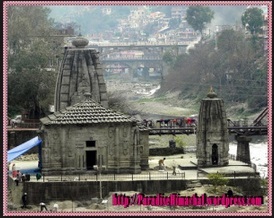 The other main deities arrive this temple of King Madhav Rai, to respect Him; the idols of Radha-Krishna, are kept inside this Madhav Rai temple which are feast to the eyes. While, these deities would wait for the emanation known as the 'Zareb', and these deities march till the Paddal ground (a venue for the Shivratri Fair celebration). Innumerable deities come here to attend the Festival as well as to pay the honor to the 'King Madhav Rai'.

Large numbers of people get accumulated, due to which people will get excited very soon, and there will be heating discussions that take place in the piling crowd. It is a great pleasure to watch or observe thousands of devotees, as well as the folk dancers along with the traditional music instruments which clad in the colorful boutiques. There are people who wear dignified Kesariya turbans which made the scene more colorful!

During this Mahashivratri fair, the sage called 'Rishi Kamru Nag' will be worshiped. It is said that, this sage was in penance on the Tarna Hill; and not always, but sometimes the God of Rain called 'Kamru Nag', gives his blessings and pours rain during the time of worship. It will be a miracle, when it rains during the prayers!

How to Reach this Temple?

It is very easy to reach this temple, as many road, rail and air ways are connected to the Mandi City. You can arrive to this sacred place via bus or taxi; and if you want to travel through trains, many trains are available to this place; while, one has to stop at the nearest railway station (Joginder Nagar Railway Station). From this station, you can make a local taxi or bus. Also, if you want to visit this spot through flight, you can stop at Bhuntar Airport (a very close airport), which is around 40 Kms from Mandi.

Summer season can be the best season to travel this holy place, as the region will be neither too hot nor too warm, the atmosphere will be pleasant to visit during Summer season.